The Bookends of the Search Contain a Secret

The first paragraph and the last form a stunning pair of bookends which contain a secret.  The secret is an homage to an unnamed titan of French letters.  The titan’s name appears nowhere in The Search, but his legacy is felt and Proust knows it and cherishes it.  I call this homage a secret because I’ve never come across it in Proust commentary.  But it’s out of the closet now.  Remember, you read it here first.  (If you find it somewhere else, please let me know!  I first revealed the secret to my Yahoo Proust group in 2003.)

The beginning of The Search, page 1, paragraph 1, takes place in that dusky state of hypnagogia where all is possible.  In bed, M holds a book and reads by candlelight.  Just barely drifting off, he imagines that he himself is the subject of the book.  “It seemed to me that I myself was the immediate subject of my book.” 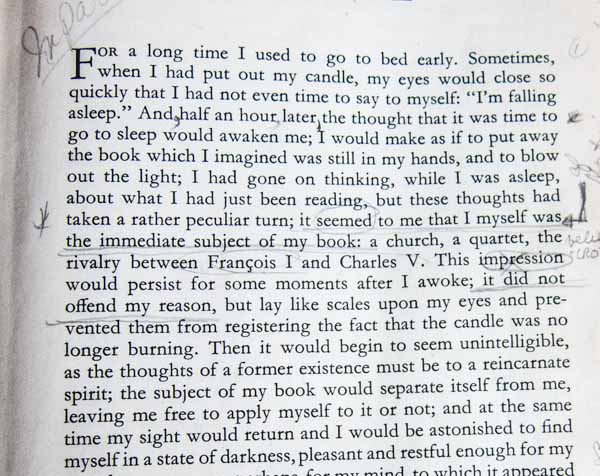 First paragraph of The Search

The end of The Search, 3000 pages later, after all the disappointments and joys, the failed loves, the gatherings, the artists, the tastes and smells, the revelations, time lost and regained – after all that, at the final gathering, M observes his people; they are old and tottery.  They are walkers perched on living stilts which become dangerous as they grow and raise the walkers to untenable heights … from which they suddenly fall. “ … as though men spend their lives perched upon living stilts which never cease to grow until … they fall.” 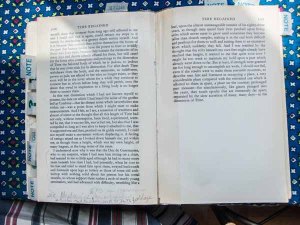 Last page of The Search

So the Proust bookends begin with the narrator as reader – one whose drowsy imagination seduces him into believing that he is the subject matter of his book.  The ending bookend portrays humanity as perched on stilts.

Now consider another pair of identical bookends  – this one centuries earlier.

First, the beginning.  The proem “To the Reader” is so remarkable and charged that I have to read and re-read it several times.  Here I pick out just the idea relevant to this note.  The writer tells that he portrays himself, that he himself is the subject matter of his book.  “it is myself that I portray … I am myself the matter of my book.” 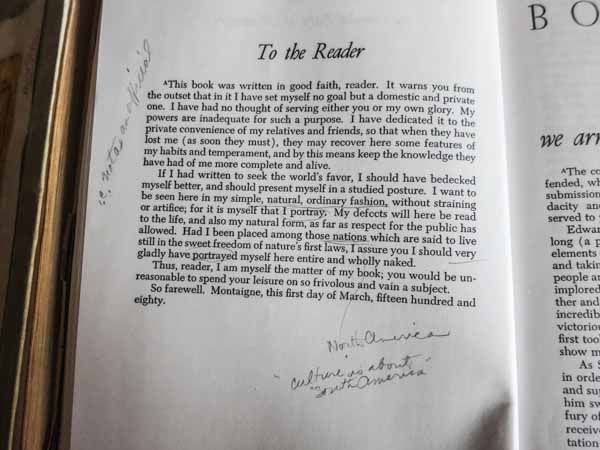 The first page of the Essays

The final page, 1000 pages later, observes that we always “go outside of ourselves because we do not know what it is like inside.”  But this external excursion that we do to ourselves is folly because we must still confront and account for our internal dispositions, habits, tastes, our insides.  And here comes the surprise.   The unnamed titan goes on to use the stilts metaphor: “There is no use mounting on stilts, for on stilts we must still walk on our own legs.  And on the loftiest throne we are still sitting only on our own rump.”  The century is the 16th and the titan is Michel Montaigne – author of another masterpiece, the Essays.

The last page of The Essays

And is this important?

It’s important. I believe that Proust saw himself in a direct line of “the grand tradition” of French letters – that he stood on classical giant shoulders …  Pascal, Racine, Descartes, La Fontaine and others.  The identical bookends are his grateful and graceful grace notes to that tradition.