What is This Thing Called Reality?

My art teacher quipped: “The reality in art is different from the reality in reality.”  This quip trained a flashlight on a section in the Search that had been tormenting me for hours (days).  From a syntactical viewpoint, the section was not as tormenting as some of those many-splendoured-sentences with clauses subordinate to subordinate clauses until backwards reels the mind.  But if the syntax was not cruel, the meaning was leashed.  His quip helped unleash the meaning.

The tormenting section lies between pages 380 and 388 in The Captive.  (page numbers refer to Vol III (of III), Vintage/Random House silver edition, Moncrieff/Kilmartin translation.   To bypass the “who is speaking?” issue (it’s irrelevant here), I use the designation “M” to refer to Marcel/ I/Narrator or Marcel Proust.

Scattered throughout the tormenting section, reference is made to “two hypotheses.”

Well, excuse me, what ARE the two hypotheses?

Sometimes there is a sneaky and unhelpful pointer to one hypothesis or the other – a coy and starchy guide like “the former,” or “the other.”  What IS this problem that is present in “all important questions” and is addressed by the two hypotheses??   Grrrr.  What is M tormenting me with??  Not only are there two hypotheses, but he also tells me that I must CHOOSE between them!!  How the hell can I do that if I don’t know what they are or what they speak to?

What follows is my take on what the problem is and what its two solution hypotheses are.  (It’s only my interpretation, not my own personal view on the problem – if, there even IS such a problem).  In the text below, from pages 380-8, I numbered and capitalized a few phrases in order to refer to them.

My teacher’s quip lit up the basic geography of the topic; we are squarely in the world of speculative metaphysics.  This is the knotty, rarified world of questions concerning “reality”.  The “two hypotheses” (1) concern its nature.  Is there more than one kind?  If more than one, is there a ranking where one kind trumps the other in value?  More specifically, M muses on the status of art, memory and impression in the great chain of Being.  He speculates on which KIND of reality those slippery phenomena are.  Does art point to another reality “beyond” itself?  How does one explain the variation in clarity or vagueness of sensation, impression and memory?  Does the degree of clarity in the impression depend on the “degree of reality?” in the object of the impression?  Can a thing be “more real” than something else? (6)  This reality problem is a really really big one – it undergirds “all important questions.”  Basically, to resolve the problem, M entertains two, just two, hypotheses – also designated as “explanations” (4).

ONE of the hypotheses is the “materialist hypothesis” (5).  It says that the universe is monistic; that is, there is only one “kind” of reality and it is material.  It is the ontological WYSIWYG (What You See Is What You Get).  It’s the “material explanation.” (5)

What you see is not what you get – I

This arid hypothesis dismisses my “feeling” (3) that reactions and states of my soul gesture to something “more exalted, more pure, more true” than what just meets my eye and my immediate impressions.  There is nothing, says the material hypothesis,  that is “more real” in those states of my soul than any other (6).

THE OTHER hypothesis says that there IS more reality than just meets the eye. 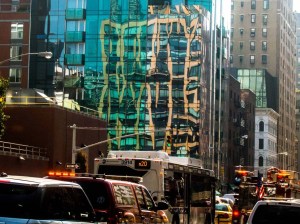 What you see is not what you get – II

What You See Is not All That You Could Get.  Why?  Because art is real too (2)  Reality is therefore (at least) dualistic; it is not just the material that is real.  Art gestures toward a universe “beyond itself.”  Art is a kind of “spiritual reality” (3) that corresponds/transcends/is beyond the material.  The vagueness and happiness in the impressions registered by the madeleine soaked in tea or in Vinteuil’s music is due to their “profundity” and to their “spiritual reality.”  That is the reason that one can describe the reality in Vinteuil’s music only metaphorically, like the perfumed scent of a geranium (3).  The scent captures the mode in which Vinteuil heard that other reality, that other universe, – beyond immediate impressions.

So, after this schema, is one or the other of these rarified hypotheses ultimately “chosen” by M?  Does he follow his own stern order – that we MUST choose?  He’s drawn to the one, thinking that there is nothing beyond the immediate tangible world, but then the irresistible lure of happiness and joy from the tea or the smell of mouldering wood draws him to the other.  So, apparently, no; he doesn’t choose. He remains the careful DOUBTER (6), ostensibly holding final answers at bay.  But, we really know, down deep, he’s not one of those rank meat and potatoes materialists.  He knows that those spiritual states of profound happiness are not illusory, neither are they caused by “illusions” (6).

It’s really not all that philosophically complicated; just hidden and leashed – just begging for undivided attention (lots of that) and assiduity (lots of that too).  There are other subjects (more important ones) that float through this section; but for me, before I could lay out this underlying metaphysic, I didn’t get very far.

I am beholden to my life-drawing teacher for his quip … but perhaps I did not unleash the meaning properly after all.  Maybe it’s still tethered and locked in there on those pages.

Here is the text that has been tormenting me.  I inserted the numbers so that I can refer to that portion of the text.

… This reaction from the disappointment which great works of art cause at first may in fact be attributed to a weakening of the initial impression or to the effort necessary to lay bare the truth (1) TWO HYPOTHESES which recur in ALL IMPORTANT QUESTIONS, questions about the truth of Art, of Reality, of the Immortality of the Soul; WE MUST CHOOSE BETWEEN THEM; and, in the case of Vinteuil’s music, this choice was constantly presenting itself under a variety of forms.  For instance, this music seemed to me something truer than all known books.  At moments I thought that this was due to the fact that, what we feel about life not being felt in the form of ideas, its literary, that is to say intellectual expression describes it, explains it, analyses it, but does not recompose it as does music, in which the sounds seem to follow the very movement of our being, to reproduce that extreme inner point of our sensations which is the part that gives us that peculiar exhilaration which we experience from time to time and which, when we say “What a fine day! What glorious sunshine!” we do not in the least communicate to others, in whom the same sun and the same weather evoke quite different vibrations.  In Vinteuil’s music, there were thus some of those visions which it is impossible to express and almost forbidden to contemplate, since, when at the moment of falling asleep we receive the caress of their unreal enchantment, at that very moment in which reason has already deserted us, our eyes seal up and before we have had time to know not only the ineffable but the invisible, we are asleep.  It seemed to me, (2) WHEN I ABANDONED MYSELF TO THIS HYPOTHESIS THAT ART MIGHT BE REAL, that it was something even more than the merely nerve-tingling joy of a fine day or an opiate night that music can give; a more real, more fruitful exhilaration, to judge at least by what I felt.  It is INCONCEIVABLE that a piece of sculpture or a piece of music which gives us an emotion that we feel to be more (3) EXALTED, MORE PURE, MORE TRUE,  DOES NOT CORRESPOND TO SOME DEFINITE SPIRITUAL REALITY OR LIFE WOULD BE MEANINGLESS.  Thus nothing resembled more closely than some such phrase of Vinteuil the peculiar pleasure which I had felt at certain moments in my life, when gazing, for instance, at the steeples of Martinville, or at certain trees along a road near Balbec, or, more simply, at the beginning of this book, when I tasted a certain cup of tea.  Like that cup of tea, all those sensations of light, the bright clamour, the boisterous colours that Vinteuil sent to us from the world in which he composed, paraded before my imagination, insistently but too rapidly for me to be able to apprehend it, something that I might compare to THE PERFUMED SCENT OF A GERANIUM.  But whereas in memory this vagueness may be, if not fathomed, at any rate identified, thanks to a pinpointing of circumstances which explain why a certain taste has been able to recall to us luminous sensations, the vague sensations given by Vinteuil coming not from a memory but from an impression (like that of the steeples of Martinville), one would have had to find, for the geranium scent of his music, (4) NOT A MATERIAL EXPLANATION, but the profound equivalent, the unknown, colourful festival (of which his works seemed to be the disconnected fragments, the scarlet- flashing splinters), the mode by which he “heard” the universe and projected it far beyond himself… [Vol III 380-382]

But while she was speaking, and I thought once more of Vinteuil, it was the other, the (5) MATERIALIST HYPOTHESIS THAT OF THERE BEING NOTHING, that in turn presented itself to my mind.  I began to doubt again; I told myself that after all it might be the case that, if Vinteuil’s phrases seemed to be the expression of certain states of soul analogous to that which I had experienced when I tasted the madeleine soaked in tea, there was nothing to assure me that the vagueness of such states was a sign of their profundity rather than of our not having yet learned to analyse them, (6) SO THAT THERE MIGHT BE NOTHING MORE REAL IN THEM THAN IN OTHER STATES.  And yet that happiness, that sense of certainty in happiness while I was drinking the cup of tea, or when I smelt in the Champs-Elysees a smell of mouldering wood, was not an illusion… [Vol III 388]