The Sound of Italy

Our Italy idyll ended Friday. So many sights, tastes and sounds – an embarrassment of …. You know. I’ll just tell you about some sounds.

A sound you won’t hear too much about in the guidebooks is the sound of song – “Avante populo, a la riscosa. Bandera rosa, bandera rosa.” Jack, Ben and I were returning to our hotel in Florence, a simple albergo, converted from a small “palazzo” where sweet silence or Vivaldi could be heard in its breakfast room – the taste of the owner who had a shelf of CDs. Ambling along, we heard loud talking in the street, many voices and that song – “Bandera Rosa” – an old communist anthem – like “Solidarity Forever.”

I know it from my childhood in Hashomer Hatzair (late 40’s and early 50’s). We sang that along with other radical standards. In this country where Berlusconi is reviled as much as Bush is in ours, a huge demonstration (5000) was gathering. They marched right by us in front of his party headquarters, lit firecrackers,

singing, carrying signs. What was it about? Berlusconi’s new tack is to move onto the schools and universities with a privatizing agenda and the marchers were angry. I couldn’t make out the details – it’s just that I was caught up in their spirit, the spirit of the masses; it was a return to my old young days of such singing and marching. Ben thinks we are listening to the beginning of the end of Berlusconi; we saw signs “Salve Italia” – Save Italy.

Another sound is the sound of talk. Consider the custom of the passeggiata – the time-honored tradition of “walking and talking” At around 6 o clock or so, the town, whatever town it is, emerges from its 3 hour quietude and goes out into the streets for the passeggiata. (Except for the major tourist attractions like the big museums, most shops and businesses shut down somewhere around 2. Only churches and a few cafes are open. Many streets are deserted.) I didn’t know about this “walking and talking” practice – became aware of it gradually. I began to notice the shocking absence of loud rock music. There were hardly any of those awful bars with angry screaming music and clusters of smokers that have infested my own neighborhood and lined Second Ave all the way from 7th St. to the 50’s. Instead of going to these kinds of talk-squelching habitats, the young Italians, … walk and talk. Imagine that. What a concept; talking as a diversion.  Scandalous.

I first noticed the phenomenon of talk and walk in Pisa along with our first swooningly delizioso gelato (coffee flavor – my favorite). Imagine Machiavelli exiled from his beloved Florence after the Medici regained power. He couldn’t talk. Depriving an Italian of talk must be akin to depriving a smoker of cigarettes.* For Machiavelli, talk deprivation would have been the most acute pain. A historian writes about talk in Florence: “Here, in many ways, was the key to Florentine republicanism: in the insistence on talk about taxes, public office, war, elections, civic leaders and everyday laws – in short, talk about politics….Florence above all, a city given to speech and full of extremely restless spirits.” In the talk department at least, it’s not a stretch to compare republican Florence with ancient Athens; after all, Aristotle wasn’t called a peripatetic for nothing! An early talk-walk person.

Finally, there is the sound of laughing. We stayed for a month in a restored farm-villa owned by friends of Ben and Jack some 10 km (about 6.2 miles) from the hill town of Volterra – an Etruscan stronghold way back when.

To go anywhere, we had to basically drive from our villa to Volterra first. Now 10 km is not very much – but the windy, curvy road to our place was completely unpaved and unmaintained. The craters were deep. The curves were like 359 degrees. 10km felt like 100. OK, what about laughing? The first few days I found myself white-knuckling it on that road (and on many other Tuscany roads up and down and around to the hill towns that we sought). After a while I decided to give up the white knuckles and just have a good time. What a strategy. On the 3 or 4 unforgettable patches in our road to/from Annunciata (our villa) we bounced up and down so hard that I almost strangled myself in my seat belt. There was such loud and raucous laughter that it probably reached the ninth Circle of Hell. (BTW, in Florence, we stayed in the house of Dante’s in-laws — nothing to write home about … but I am.)

Today, back in Amsterdam, I helped Jack in his garden. There is a kind of English romantic feel to it. Some wild flowers are allowed to flourish along with roses, Sweet William and other domesticates – as long as they respect their own territory and don’t try to take over. It may look like a mad mélange – but there is high poetic and 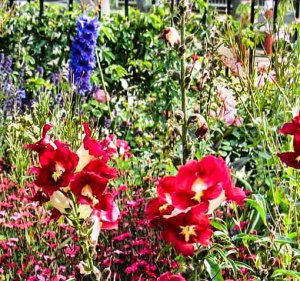 philosophical beauty. You could say that he has fostered a balance of power among the elite roses and the demotic wildflowers. Hmmmmm. It was so enjoyable, maybe I’ll volunteer a couple of hours in the communal garden on Jane Street (corner of 8th Ave.)

*Here is the most famous letter in Italian literature. It was written by Machiavelli from his farm outside of Florence where he was self-exiled after being fired by the returning Medici. I read the letter aloud when we visited the site. I imagined him seeing his beloved duomo in the distance and longing for his old life of talk, politics, electioneering. But Jack observed that if he hadn’t been summarily truncated from that life, we might not have his masterpieces.